Marathon Deaths. What on Earth is happening?

Hearing the tragic news about Claire Squires, a thirty year young woman who collapsed and died at mile 25 during the London Marathon compelled me to share the details of my experience during my second marathon. Race deaths (geez, is there a name for this occurrence now?) seem to be a taboo subject for runners. What good would it be to tell your family and friends "wow, another runner died at a race this week" unless you want to scare the crap about them from now on every time you step out to the start of a race?

And as runners, we all tend to make assumptions about what might have caused the death- perhaps this is our way of reassuring ourselves that this cannot happen to us:

He/she probably had an undiagnosed problem.
He/she is probably inexperienced.
He/she likely didn't hydrate properly.
He/she might have been sick and decided to run the race in spite of this.
He/she probably pushed too hard and didn't listen to his/her body.
He/she isn't used to heat/humidity and exertion.


And the irony of these statements is that all could apply to every single runner that I know, myself included at some point or another... except we are all fortunate enough to be alive. So what does this mean?

It means what we do not want to believe that it means.  We all put our selves at risk every time race.  I want to tell you EXACTLY WHAT HAPPENED TO ME during the last few miles of the marathon that put me in an ambulance.  I never thought of mulling over all the details, but if there's a chance that reliving my trauma can save someone's life, I feel like I have to do it.  I'll highlight some of the mistakes I made and go into detail about the weird things that I gave no thought, but were pretty significant signs of danger.


This race was in June.  It was my second marathon in a two week time span.  I was totally prepared to take it slow- the forecast said that the temperature could climb to the mid 80's.  I am someone who loves hot weather.  I prefer a hot sticky run over a cold bundled up run any day of the week.  Nonetheless, I am not a complete moron and I knew that running 26.2 miles in my favorite type of weather is difficult.  I was dressed minimally with the intention to strip down to a sports bra and shorts. I was adequately hydrated and carb loaded- though who can really prove this to themselves?  I had no qualms with walking and there is ZERO drive to attempt a personal record at this race.

Before the race,  I took two extra strength ibuprofen. (Advil) I had heard from other runners that this is a good way to prevent aches/pain during a long long long time on your feet particularly when you already have these before you even start.

This beautiful scenic course is full of little hills- although the website boasted that it was mostly flat, I found that to be untrue.  I was working much harder than I had expected and this made me a bit anxious.


I took water and gatorade at EVERY hydration point except for one.  Somewhere after the half way point, I ditched my top.  I deliberately wore something I was willing to part with- a thin strapped red top that was at least 5 years old.  It was drenched in sweat.  I twisted it to make it easier to hold and I had to wring it out.  Even though I had worn this RED top several times over the years to the point that it was faded and no longer bled in the wash, when I wrung it out, the sweat it had absorbed was colored by the shirt.  I wrung out a puddle of pink colored sweat and went on my way.  Strange, considering I could wash the thing with my whites and not worry...  I eventually found a garbage can and managed to toss the shirt right next to it.  My aim isn't so good after this many miles, I guess.

Into the 16th mile I started making a conscious effort to drink more water (not gatorade- it wasn't at every stop) at each hydration point.  I only had 2 energy gels.  I kept telling myself that I should take a couple more, but I felt *ok* and my mouth wasn't dry and I actually stopped for bathroom breaks 3 times.


Approaching mile 20, I started to feel really...  strange.  It was a mix of panic, fear, sorrow (the way you feel when you hear sad news or something tragic just happened) and helplessness.  Everything was fine- I wasn't in pain and I wasn't struggling- in fact, I was already taking regular walk breaks at this point. I quickly assessed my body just in case I was in denial of something- but nothing was hurting, I was breathing just fine, and I wasn't thirsty.  (I was taking two full cups of whatever liquid was available at every hydration stop at this point.)  I started getting confused- almost like I wasn't sure what I was doing out there.  I had to keep reminding myself that I was running a marathon and I was getting closer to the finish.  I kept questioning if I was going in the right direction.  I kept losing track of how many miles I had already done, and I had trouble figuring out how many miles were left.  I could not add 6 to 20 and come up with 26 without counting it up on my fingers.  It felt like my brain was on a slow motion setting.

I had my phone with me (it's a safety measure and my music source) and when I reached mile 24, I sent a text to my husband telling him that I was doing fine, but I was walking a lot and that I had two miles to go.  Just before I put the phone back in my pocket, I looked at the time.  Even though I knew that time we started, I could not figure out how long I had been running.  I kept staring at the time on my phone and trying to figure out how long I had been out there.

As I approached mile marker 25, I got excited.  1.2 to go!  (I was able to do math!)  Upon this realization, I felt my heart rate rise and my throat close up. I felt like I was breathing through a straw.  The ground felt like it was moving under me.  Everything got hazy and I saw some spots.  I approached a couple of spectators and told them what was happening.  One of them offered me his last swig of tepid water.  I actually noticed that I didn't feel thirsty, but I took it.  I walked for a few minutes until I could breathe normally and proceeded to do that exhausted not-quite-jog-but-not-quite-shuffling type of moving toward the finish.

At mile marker 26, it happened again.  Haziness.  Trouble breathing.  The ground was shaking.  Tears this time, because I realized this meant trouble.  I had one fifth of a mile to go.  I thought about what it would be like to DNF at .2 from the finish.  I "ordered" my body to stop whatever was happening.  I walked, jogged, walked, jogged, then ran when I saw the finish line.

After I crossed the finish and the medal was hung around my neck I walked with my husband for a minute then sat down on the grass and took my shoes off and realized the same thing was happening again.  I happened to be directly in front of an ambulance and I told the EMTs who were standing outside of it that I felt the ground shaking and I couldn't breathe.  They sat with me until I felt normal enough to be escorted into the ambulance. 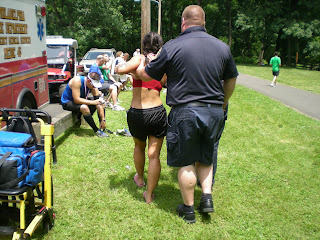 They checked my vitals.  Three times.  My heart rate was 140 bpm and holding steady there.  My blood pressure was 70/40.  They were surprised I was conscious and coherent.  A skin turgor test suggested I was NOT dehydrated.  They wanted to take me to a hospital.  They connected an IV to my arm and monitored my vitals.  After almost an hour, my heart rate decreased to 80 bpm.  In spite of their attempts to insist that I be taken to a hospital, I refused.  I left the ambulance feeling *ok* considering the fact that I just ran 26.2 miles and spent an hour in an ambulance...

For some ridiculous reason, I was intent on going to work the very next day.  I was still in a fog.  I had trouble remembering how to do some of the simplest most monotonous tasks that my position requires.  I had to give painstaking effort to accuracy.  I failed at using tools I use on a daily basis.  The lights seemed like they were dimming.  After about an hour of struggle, confusion, and worry, I told my supervisor, who told the safety officer, who told me it was probably best that I go home.

All of my symptoms point to hyponatremia- a metabolic condition in which there is not enough sodium (salt) in the body fluids outside the cells.  One of the causes of acute hyponatremia is excessive sweating.  Hyponatremia can lead to death.  The fact that I took ibuprofen before the start of the race most likely worked against me.  Ibuprofen can interfere with kidney function, which is the last thing you need when you are exerting yourself and sweating excessively for hours in hot hot weather.

What could have happened if I decided I was too much of a bad ass to listen to my body?  According to my doctor, I might have had a heart attack.  What if I was too prideful to walk that course as much as I did?  What if I wasn't RIGHT IN FRONT of an ambulance with EMTs standing outside of it at the finish line?  Would I have been another news story?  I don't like to think about it.  I would rather risk going home with a slow marathon time than risk not going home at all, ever again.  I cannot speak for those who lost their lives while racing, and I certainly don't mean to imply that they were careless- I have no idea what exactly happened to them or what was going through their minds. However, it took me a couple of weeks to finally accept the fact that I indeed risked my own life by running that marathon.  And whether you want to admit it or not, every time you step up to the start, you do too.  I continue to run, of course, but boy am I humbled by this experience.  New Jersey Marathon will be my fourth marathon in less than a year.  Of course I want a PR but if I had a choice between running a slow marathon and death, I'm sure it's obvious which one I would choose.

I hope you will share this with other runners, no matter how seasoned or inexperienced you are. Running is one of my favorite things in life, but it is certainly not worth dying for. Never assume you know better than what your body is trying to tell you. You have too many other races to run and too many other amazing moments and memories to be present for. So be careful out there.