April 21 is my wedding anniversary. A year ago today, we were married in Las Vegas. We took the boys with us and had a fun, adventurous, memorable trip.

This year, we celebrated in the best way I could ever imagine possible. No gifts. No dining out. No party. No romantic getaway. Way better.... 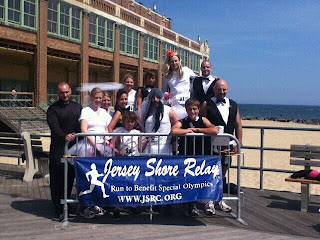 We, as brides, grooms, a cupid and a priest ran Runapalooza- the Jersey Shore Relay Marathon. We had two teams- each runner takes a part of the 26.2 miles that spans from Seaside Heights to Asbury Park NJ. We had a little fun with the costumes. After all, what good are my sewing skills if we can't stir things up a bit?

My sons were all on my team. Imagine! A whole family that runs! My older two were grooms. My sweet baby was our Cupid. Both teams had a blast taking photos throughout the course. We got some great shots! Here are just a few: 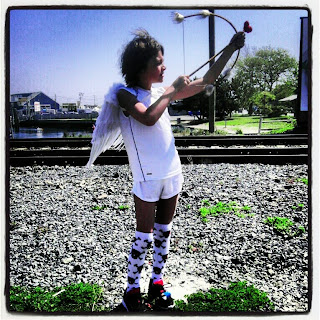 My sweet baby little boy (who is now TEN!) ran our final leg dressed as Cupid. Letting him go on that boardwalk on his own was a big deal for me. We stopped in two places to make sure he was "ok" while running in very very familiar territory alone. This was his very first solo race as I have always run alongside him. He was determined to do it by himself, but he professed to being rather bored with no one to talk to through his 3.1 mile stretch. He made it! And he stole the show.

I swear I am not a walking commercial, but I could not help but tell a few people about the Instead Softcup Challenge. Even though Evofem is compensating me for the work that I am doing, I'm not the type of person to go around pitching stuff. However, I had the pleasure of running alongside a woman who was splitting this race with her husband (awesome, right?) and I told her about the Instead Softcup Challenge when we started talking about how much race registrations can make a dent in your wallet! She had never heard of Instead Softcup, and hopefully she is reading my blog and signing up! After the race, two of my teammates asked me about the product. I offered them samples and told them about how Instead Softcup can make period days seem like totally normal days. My husband and kids actually took turns wearing my Softcup visor during the race. (I wish I took pictures!) After making two vests/bowties for teammates in 25 minutes, rushing out to drive to the start, and seeing my oldest child off, I finally had a little time to be in full regalia: 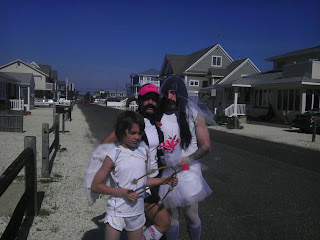 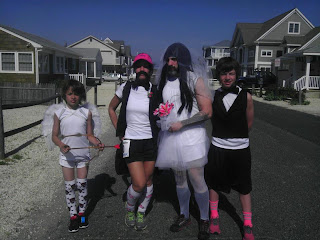 I CANNOT WAIT to raise the bar in our up and coming costumed races. I love that my husband's gift to me was to commit running this relay. I love that my sons all ran with enthusiasm and that my friends were with us to enjoy this day. I love that we don't care how fast we were. We ran because we all love to run. I hope you run for the same reasons. Life is too short to struggle through pressure and competition in every single thing we do. Sometimes we need to run ( and live) just to run!
Posted by Unknown at 11:38:00 AM