Why do we do the things we do?  Why do we run? Bike? Swim? (insert activity here)? Because we can? Sure.  Because it's fun?  Yes, sometimes.  Because it's a challenge?  Ah, that's definitely a part of it.  Why did I decide to do a triathlon sprint?  All of the above.

I've always enjoyed biking, and over the past few years I've taken up running. When I found out about a triathlon sprint taking place in my area, I was intrigued. The sprint distances sounded reasonable, a 300 meter swim, 10 mile bike ride and 3 mile run.  Not too bad I thought. My bike rides would normally take me out anywhere between 5 and 15 miles (although I hadn't really biked in a year or so), and my runs usually go for 3 miles, sometimes a bit longer.  I hardly ever swim, but 300 meters sounded doable.  Put them all together, back to back?  That sounded challenging.  I had about two weeks to decide if I wanted to participate.

I was pretty sure I wanted to do the race, but I didn't have a bike to use. Sure, I had a mountain bike that I would take out for long rides, but that wouldn't do in a race. The bike was too heavy and the tires too big, making it a slow ride. I had to find a new bike. A nice racing bike. Now here was the thought that may have really pushed me into doing the triathlon (yes, yes, and the need to overcome the challenge!). Over the past few years I had been spying some fancy bikes hanging in my local bike shop. I kept telling myself I would buy one next summer, but I just never wanted to spend the money. Well, here was the push I needed. I really wanted a new bike! After test riding a few bikes at a couple different stores, I finally found one that I liked (and that was in my price range, because let me tell you there are some sweet and expensive bikes out there!). New bike in hand, I now had about two days left to register for the triathlon. Since I bought the bike, I really had to do the race. What the heck, I thought. The worst that could happen would be a slow finish time. 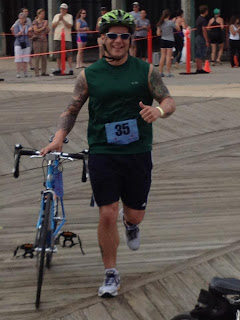 At the same time I was bike shopping and trying to decide if I really wanted to do the race, I viewed some videos on the internet showing exactly what takes place in a transition area- the area where you go from swim to bike, and then from bike to run.  After watching the videos I was feeling much better about that part. I learned what I should bring to the transition area (water for cleaning my feet after the swim and a towel at a minimum), how to position my bike, and how to arrange my gear to make for a quick transition.

Bike shopping done and internet research completed, I next had to decide what I would wear. Complicating things, this race also had a sexy outfit contest! Watching the internet videos on other triathlons, it seemed like everyone was wearing a wetsuit for the swim part. I didn't want to spend money on a wetsuit I would only wear once or twice (and which I didn't have time to shop for). And besides, I wanted to win that sexy outfit contest! I decided I would just go with a speedo for the swim and then throw on a shirt and shorts for the transition to bike. Well, in hindsight, I should have left more time for speedo shopping. I couldn't find anything I liked (or anything modest I should say). I decided to go with my standby plain black speedo.  It wouldn't win me the sexy outfit contest, but it would do.

I signed up for the race. The day before the race was the packet pickup (race number and timing chip) and a transition clinic. The transition clinic is where the race pro offers tips on moving from the swim portion to the bike portion to the run portion. He answered questions similar to the ones I saw in the internet videos I had watched- How do I rack my bike? What gear should I have? - and also took us through the course map showing the bike and run portions. While there I got to talk to other people doing a triathlon for the first time, and also others who had done it many times before. That was helpful. One athlete offered me tips on setting up my gear at the transition point. After talking with him, I felt a lot better about doing the race, especially the swim portion.  I found out there would be lifeguards on surfboards along the course where we could stop and rest if needed.

At this point I was getting nervous about the 300 meter swim.  The swim was going to be in the ocean and I hadn't really had time to practice swimming. Sure, I swam in my pool, but that's easy. There are no waves or currents working against you. Well, there was nothing to do for it at that point.  I was committed and the race was the next morning. I decided I would just do my best and if it took me a long time to finish the swim part, so be it. 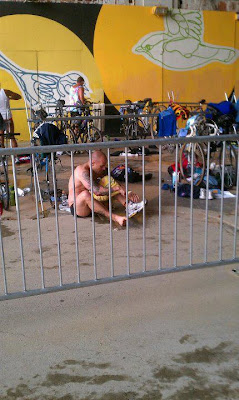 Race day. I was there bright and early. I staked out my place in the transition area, set my bike up, arranged my change of clothes, and waited. And waited. Waiting is the worst part. The anticipation. The wanting to get started, get moving. Standing around did give me a chance to talk with other triathlon first timers. Knowing I wasn't the only one was somehow calming. I wasn't in this alone. Others were just as nervous about the swim portion as I. Others were doing this for the first time and were just in it for the fun.


Time for the swim. Standing on the beach watching the buoys being placed out in the ocean was not pleasant. They were so far out! Was 150 meters really that far out? Too late to think about that now! As they signaled the start, the water came alive with kicking feet and flailing arms. So many people and so little room! I quickly fell to the back of the pack and tried to get my rhythm. I wasn't in this to beat any records, just to prove to myself that I could do it. Because that's what it is all about. At least for me. I do these races for the fun of doing it. For the camaraderie that comes with racing with friends or being part of a team.  The only person I'm competing with is myself (ok well, and maybe one or two friends sometimes).

Darn, I really wasn't prepared for the ocean swim!  I couldn't fall into a rhythm.  I kept getting hit in the face with waves, getting water in my nose and mouth.  I hate that.  It really freaks me out.  So, my swim turned into a crawl.  Thank goodness for the lifeguard rest stations.  I think I stopped at every surfboard.  It was a little embarrassing, but what could I do.  On the bright side, one of the lifeguards was a cousin I had not seen in eight or more years.  So I did get to reconnect (for a minute in the ocean, later on Facebook) with a family member.  As I crawled out of the ocean, I was glad to see I wasn't the only laggard.  Three others were having as hard a time as me. 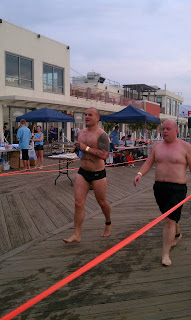 By the time we ran into the transition area to start the bike portion, we were the only guys left.  In fact, the women from the women's heat, which started about 10 minutes behind us, were already on their bikes and out the door.  I didn't care.  The water part was done and now I could start enjoying myself!  As grabbed my bike and ran out to the street, I had a big smile on my face.  I was already tired but knew I could recover on the bike.  Maybe even make up for some lost time.  I completed the 10 miles bike ride without incident.  I think I did well in that portion.  Almost as well as I did on my trial ride the week before, when I was completely fresh.

With the bike ride finished, it was time to do the three mile run.  By this time I was tired, but I figured it was almost over.  I started the run, getting past the spectators.  Once I was clear, I ran as far as I could, then walked a bit.  Run, walk, run, walk.  Until I was in sight of the crowds (and my friends) again.  Then I ran again.  I didn't want them to see me walk!  Even though I was doing this race for me, I was still vain about not showing weakness.  I think that thought actually carried me through the last half of the run.  I found a (slow) pace and stuck with it until the end. 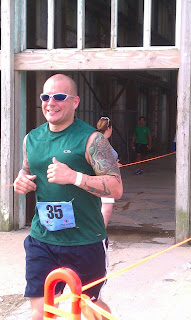 Crossing the finish line was good.  I felt like I accomplished something.  I tried something new, something that combined my love of biking and running with a swim that was challenging for me.  I completed a triathlon sprint.  And most importantly, I got a medal!

Now that I've done a triathlon, I'm looking forward to my next challenge.  Maybe a half marathon?  That would be a challenge.  But isn't that what makes life interesting?

If you would like to be a featured anyBODY Runner use this link to email us.