Philadelphia! The marathon that.... is.

I finally started getting excited about this race about a week before race day. Prior to that, it was daunting and a bit overwhelming whenever it crossed my mind. Why?

*Did not follow a training program to the letter like I did when training for Lake Placid.

*Had some pointless pointless pointless work stress that made my reasonably enjoyable, rewarding, challenging but somewhat predictable job dismal and dreadful. I will spare you the details, except to say that all changed just days before the marathon. When it changed it was almost as though our (everyone I work with) locked cage was open. Or a savior arrived to spare us imminent doom. Or Alan Funt showed up to tell us that we were on Candid Camera and the last several weeks were a sick joke. These examples are only slight exaggerations, people. It was that bad. Having an ever-present-always-looming burden of "I would rather clean public toilets with my own toothbrush than speak to or be spoken to by my supervisor" suddenly wiped away days before a 26.2 mile run is freakin' awesome and that's all I have to say about that. Conversely, living daily with the type of dread I described for so long affects so many things in life- it crushes your spirit a little even in the aspects of life that you love.

*Briefly rekindled a long lost pass time- for about a week and a half I allowed myself a couple of evening cocktails (martinis to be precise) nearly every day until about 5 days before the race. I know that alcohol consumption can obliterate much progress made in training, but I consciously chose to take the chance and enjoy. It was fun and it felt good.

I contemplated boring you with the details of the night before the race- how I almost forgot my running shoes. How we needed two beds and only got one king bed (but that kinda worked out because we given a giant hospitality suite with two roll aways and a sofa bed) and how we goofed around at the expo and how we had a bit of a headache in trying to find somewhere to eat. Here's a pictoral: 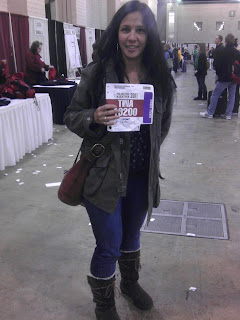 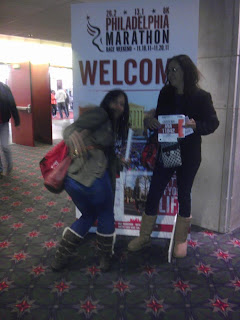 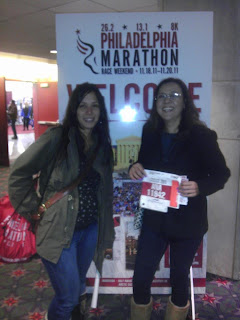 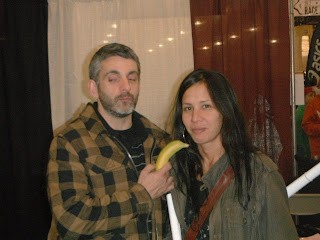 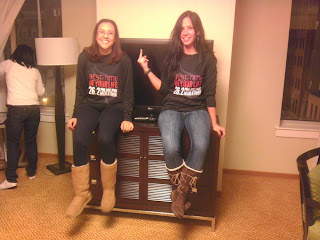 I'd like to say I woke up ready to run, but I kinda never really fell asleep. The two or three hours of sleep I got was rather restless and I resigned myself to lying in bed, intermittently hydrating and pretending to sleep until my alarm went off at... whenever it went off... early...

We all got up and I started eating whatever it is I ate. I tried not to count the hours of NOT sleeping that I did and got dressed and excited. Third marathon medal. No ambulance. Sub 5 hour. Don't fall too far behind Ana and give her bragging rights forever... These were my goals. 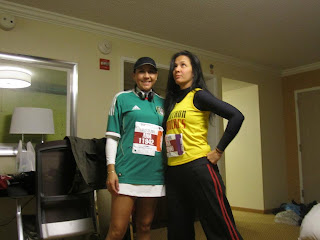 I had to post this because of how tall I look. It's strange. I'm not that tall. 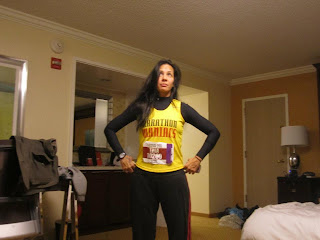 Race morning included a 1 mile walk to the start and my first Marathon Maniacs group shot: 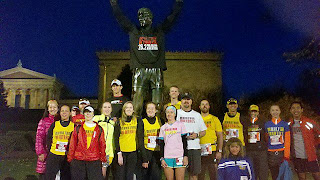 ...a photo of us at the Rocky statue. Ana has never seen a Rocky movie. I almost feel like she is not worthy to stand next to this statue. But anyway, doesn't the sky look amazing? 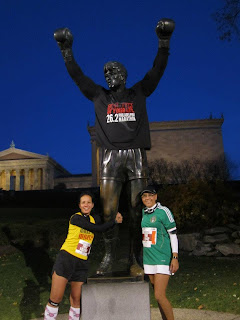 So we find the orange corral (I decided to start with Ana so that I would have some sort of clue of how far ahead she'd be) and we waitwaitwaitwait.... 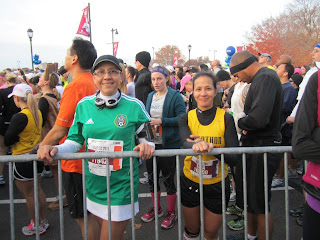 This race is slightly familiar. I did the half in 2008 and the ING half in 2010. As someone who gets lost driving the very same route home if the weather is bad, I didn't recognize much of anything from my previous romps through Philly.

Choosing Lake Placid as my first marathon was the wisest ignorant choice I ever made in my running "career" because I did not notice any hills in Philly. I noticed that I slowed down for unknown reasons (the hills I didn't notice, rather) at certain areas, but that's about as traumatic as the hills seemed to me. Hoo. Ray.

Ana was a good 3 minutes ahead of me for the first 10k. This is actually good considering she has me by about a minute and a half as far as 5k PR's go... I can live with that. I am feeling very comfortable through the first half of the race. This is what I wanted: comfortable. When you are running 26.2 on less than 3 hours of sleep comfortable is practically a phenomenon.

I was surprised when Ana came from behind me and tapped me on the shoulder somewhere around mile 12. She stopped to use a port-a-john and the wait (and the facebook status updating and photos she took along the way) caused her to fall just behind me. We hit the half mark one second apart. She was already telling me that I was going to beat her- and I assured her that we would spend the rest of the race taking turns passing each other. Every single Marathon Maniac that passed me or that I passed gave props and encouragement. This was awesome!

My walk breaks started at mile 15. Instead of just walking while drinking, I took an extra 20ish seconds to walk after I ditched my cup at each hydration station. My quads started to ache and for some dumb ass reason, I never stopped to stretch. This probably encouraged more walk breaks. I could still see Ana here and there, but somewhere by mile 16 she fell further behind me. And I couldn't see her anymore. I was concerned. I kept moving- my pace was around 10:40/mile at this point and I was ok with that. But I did not want my friend to fall too far back. I was certain that once she caught up, we could pull each other through the rest of the miles and finish strong (enough)... At mile 19 I start walking more and looking behind me a lot. Where is this woman? I figured if I slowed down a little more, she'd catch me sooner. I am closing in on finishing after 4:40 (so no PR) and that is perfectly fine with me- I'm spent and hungry and nauseous and I swear I could lie down in the middle of the road and sleep soundly at this point. I was trusting that the sight of her would give me a second wind and we could pick up whatever we had left and finish together.

I start talking with other runners who are walking at mile 22. They are upset and defeated and I am trying to tell them that they still have a solid sub 5 hour time in their hands if they pick up the pace with me and finish it now. They can't. I don't know where my friend is, and I look back one last time to reassure myself that the 5 hour pace team is not in sight. And I run. There's no cups at the hydration stops. The volunteers are offering to pour water and gatorade into our mouths. I start thinking about Ana and how I KNOW she didn't stop at every hydration stop. I know that she may not welcome a total stranger patiently pouring water into her mouth. I start thinking about her falling further behind. So I decide to just finish this run. I know she isn't a quitter so she's right behind me somewhere and just like I have faith in myself that I can/will do this, I conjure up the same faith in her. And I knew the five hour pace team and their annoying bunch of red and white balloons was catching up to me and I was NOT going to let them pass me, dammit.

I experienced severe nausea. There was occasional numbness right above the back of my ankles and I wasn't sure if it was going to get worse or if it was a sign to slow to a walk again. All my joints ached. I could feel blisters pop and reform on my feet. (Flying pig socks are not good for a full marathon, now I know...) My nose would not stop running. At mile 24, there are cups! So I chew a salt pack, drink some water, and convince myself that there will be no ambulance or IV or severe consequence to running this stupid distance again.

I needed this after what happened in Pennypack Park. To feel deteriorated from head to toe, and to not panic and to press on. I crossed the finish four minutes before those stupid red and white balloons at 4 hours 56 minutes. Yes. I'll take it. That's enough. 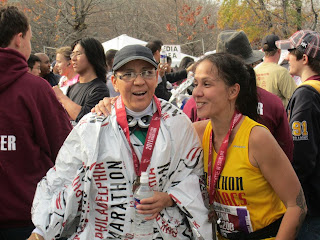 Her first marathon, and my third. 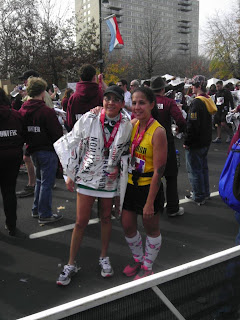 At mile 24 I practically convinced myself that marathons were really stupid- that I was never going to do another one again. But today I'm thinking of throwing another one in there before the NJ Marathon in May. This is a mental illness. Oh well, I guess there are worse things.
Posted by Unknown at 8:14:00 AM